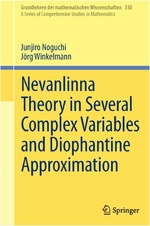 This book with nine chapters systematically describes Nevanlinna theory of meromorphic maps between algebraic varieties or complex spaces, building up from the classical theory of meromorphic functions on the complex plane with full proofs in Chap. 1 to the current state of research.Chapter 2 presents the First Main Theorem for coherent ideal sheaves in a very general form. With the preparation of plurisubharmonic functions, how the theory to be generalized in a higher dimension is described. In Chap. 3 the Second Main Theorem for differentiably non-degenerate meromorphic maps by Griffiths and others is proved as a prototype of higher dimensional Nevanlinna theory.Establishing such a Second Main Theorem for entire curves in general complex algebraic varieties is a wide-open problem. In Chap. 4, the Cartan-Nochka Second Main Theorem in the linear projective case and the Logarithmic Bloch-Ochiai Theorem in the case of general algebraic varieties are proved. Then the theory of entire curves in semi-abelian varieties, including the Second Main Theorem of Noguchi-Winkelmann-Yamanoi, is dealt with in full details in Chap. 6. For that purpose Chap. 5 is devoted to the notion of semi-abelian varieties. The result leads to a number of applications. With these results, the Kobayashi hyperbolicity problems are discussed in Chap. 7.In the last two chapters Diophantine approximation theory is dealt with from the viewpoint of higher dimensional Nevanlinna theory, and the Lang-Vojta conjecture is confirmed in some cases. In Chap. 8 the theory over function fields is discussed. Finally, in Chap. 9, the theorems of Roth, Schmidt, Faltings, and Vojta over number fields are presented and formulated in view of Nevanlinna theory with results motivated by those in Chaps. 4, 6, and 7.