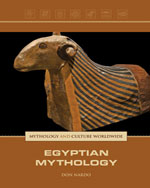 This title in the Mythology and Culture Worldwide series introduces readers to the elaborate mythology of ancient Egypt, providing detailed discussion of the mythology's importance to its own culture and the impact it had on subsequent cultures. The numerous deities worshipped by the ancient Egyptians are described and their importance to different groups and in different regions within the empire are explained. Stories are retold along with explanation of how they reflect the values and concerns of Egyptian culture.