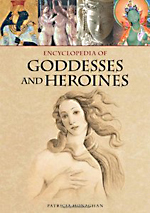 Drawn from a variety of sources ranging from classical literature to early ethnographies to contemporary interpretations, the Encyclopedia of Goddesses and Heroines provides a comprehensive introduction to the ways goddess figures have been viewed through the ages. This unique encyclopedia of over thousands of figures of feminine divinity describes the myths and attributes of goddesses and female spiritual powers from around the world.

The two-volume set is organized by culture and religion, exploring the role of women in each culture’s religious life and introducing readers to the background of each pantheon, as well as the individual figures who peopled it. Alternative names for important divinities are offered, as are lists of minor goddesses and their attributes. Interest in women's spirituality has grown significantly over the last 30 years, both among those who remain in traditional religions and those who explore spirituality outside those confines. This work speaks to them all.