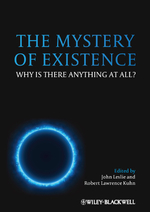 The Mystery of Existence: Why Is There Anything At All?, 1st Edition

The Mystery of Existence asks the haunting question: Why does anything exist? Anything of any kind, anywhere. The first edited volume to cover an extremely wide variety of solutions to what must be the ultimate mystery, it features dozens of luminaries. They range from Plato and Aristotle to Aquinas and Leibniz, and then to modern thinkers. These include physicists Stephen Hawking and Steven Weinberg, philosophers Robert Nozick and Derek Parfit, philosophers of religion Alvin Plantinga and Richard Swinburne, and the Dalai Lama. Some answers are philosophical, some are theological or religious, and yet others come from physics and cosmology--fields in which debate on the deep origin of all reality continues to rage.Whether you believe the universe began with a quantum-fluctuation big bang or in the creative consciousness of a divine designer, here is a feast for the mind. With enlightening introductions to each section, and offering a wealth of suggestions for further reading, The Mystery of Existence provides general readers, students, and researchers with a readily accessible map of the many diverse paths humans have followed when confronted by the most baffling of all enigmas - Why is there something rather than nothing?