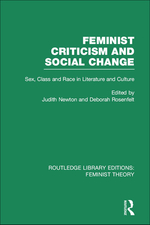 This lively and controversial collection of essays sets out to theorize and practice a 'materialist-feminist' criticism of literature and culture. Such a criticism is based on the view that the material conditions in which men and women live are central to an understanding of culture and society. It emphasises the relation of gender to other categories of analysis, such as class and race, and considers the connection between ideology and cultural practice, and the ways in which all relations of power change with changing social and economic conditions. By presenting a wide range of work by major feminist scholars, this anthology in effect defines as well as illustrates the materialist-feminist tendency in current literary criticism. The essays in the first part of the book examine race, ideology, and the literary canon and explore the ways in which other critical discourse, such as those of deconstruction and French feminism, might be useful to a feminist and materialist criticism. The second part of the book contains examples of such criticism in practice, with studies of individual works, writers and ideas. An introduction by the editors situates the collected essays in relation both to one another and to a shared materialist/feminist project. Feminist Criticism and Social Change demonstrates the important contribution of materialist-feminist criticism to our understanding of literature and society, and fulfils a crucial need among those concerned with gender and its relation to criticism.

Front Cover.
Half Title Page.
Title Page.
Copyright Page.
Other Frontmatter.
Contents.
Contributors.
Acknowledgements.
Preface.
Introduction: Toward a Materialist-feminist Criticism.
1: Theory.
2: Toward a Black Feminist Criticism.
3: Race and Gender in the Shaping of the American Literary Canon: A Case Study from the Twenties.
4: Constructing the Subject: Deconstructing the Text.
5: Ideology and the Cultural Production of Gender.
6: Writing the Body: Toward an Understanding of L'écriture Féminine.
7: Applied Criticism.
8: Villette.
9: Aurora Leigh.
10: Inverts and Experts: Radclyffe Hall and the Lesbian Identity.
11: Shadows Uplifted.
12: From the Thirties: Tillie Olsen and the Radical Tradition.
13: Romance in the Age of Electronics: Harlequin Enterprises.
14: Real Women.
Index.