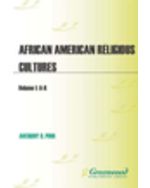 The first Africans to arrive as slaves in the Americas brought with them an array of faiths, including Islam and indigenous African religions, as well as an exposure in some cases to Christian beliefs. Over the past four centuries, these diverse spiritual roots have woven together - with still other faiths adopted and developed along the way - to produce the complex fabric of the contemporary African American religious experience.

This breakthrough encyclopedia offers alphabetically organized entries on every major spiritual belief system as it has evolved among African American communities, covering its beginnings, development, major doctrinal points, rituals, important figures, and defining moments. In addition, the work illustrates how the social and economic realities of life for African Americans have shaped beliefs across the spectrum of religious cultures.