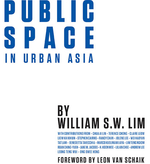 Over the past few decades, rapid urbanisation has threatened to erode public space, especially in emerging economies. Market forces that prioritise profit generation are allowed to construct venues of consumption in its place. Though their physical appearance may resemble traditional public space, in reality, they are greatly restrictive and diminished in affordability, accessibility and social meaning. It is in this context that William SW Lim, chairman of Asian Urban Lab, has brought together architects, designers, historians, sociologists and urbanists from the region to discuss public space in selected Asian cities.Part One contains essays from participants from Chongqing, Hong Kong, Jakarta, Kuala Lumpur, Singapore and Taipei and observations from commentators. Several essays by William SW Lim on the subject round off the discussion in Part Two. The thoughtful essays in Public Space in Urban Asia emphasise how engaging with the present actuality of cities and public awareness of spatial justice in cities are crucial - for it is the achievement of spatial justice that will help create a greater level of happiness across societies in our increasingly urbanised world