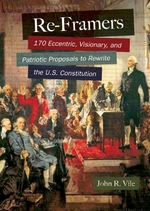 The U.S. Constitution was carefully written by a remarkable group of men, but subsequent generations of Americans have devoted enormous time and energy to "improving" it. From colonial times to the present day, Americans of all political persuasions have campaigned to reform, remake, or replace this key document. The growth of the Internet and self-publishing has spawned a virtual explosion of such proposals. This book documents the numerous ideas for change-some practical, some idealistic, and some bordering on fanatical-that reflect America's Constitutional heritage and could shape the nation's future. Re-Framers: 170 Eccentric, Visionary, and Patriotic Proposals to Rewrite the U.S. Constitution sets the stage for this review by describing various prequels to the U.S. Constitution and explaining how the final document emerged at the Constitutional Convention. The subsequent chapters examine many proposed alternatives and revisions to the Constitution from its establishment until the present, illuminating perceived strengths and weaknesses of the current document as well as the pros and cons of possible amendments. Readers ranging from lay citizens who are interested in constitutional issues to historians, political scientists, law professors, and reference librarians will all benefit from this unparalleled examination of proposed constitutional amendment.

Front Cover.
Title Page.
Dedication Page.
Copyright Page.
Contents.
Alphabetical Listing of Meetings and Authors of Plans Covered in this Book.
Acknowledgments.
Introduction.
1: American Constitutional Prequels.
2: The Writing and Ratification of the U.S. Constitution and Its Emergence from a Number of Alternatives.
3: From the Founding Through the Civil War.
4: From Reconstruction to the Turn of the Century.
5: Proposals Occasioned by Progressivism and World War I.
6: Proposals from the Great Depression Through World War II and Beyond.
7: Proposals from the Tumultuous 1960s and 1970s.
8: The Reagan and George H. W. Bush Years.
9: The Clinton Years: Approaching a New Century and a New Millennium.
10: The George W. Bush Years.
11: The Barack Obama Years.
12: Constitutional Reform in Cyberspace.
13: Constitutional Reform and Constitutional Archetypes.
14: Analysis and Conclusions.
Select Bibliography.
Appendix A: The Constitution of the United States.
Appendix B: Amendments to the U.S. Constitution.
Index.
About the Author.