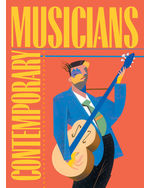 Contemporary Musicians: Profiles of the People in Music

While popular music in all its varied forms is a source of common interest and an insatiable curiosity among readers of all ages, thorough biographical information about its stars and superstars can be difficult to find. Consult this ongoing reference series for biographical information on more than 3,600 important figures in today's musical arena. Covering all genres of modern music, Contemporary Musicians profiles artists involved in rock, jazz, pop, rap, rhythm and blues, folk, New Age, country, gospel and reggae.

This title is now available in eBook format through Gale Virtual Reference Library. Gale Virtual Reference Library is taking eBooks to the next level by delivering a wealth of reference content in a database format. This valuable new product allows libraries of any size - based on user's needs and usage patterns - to develop collections at their own pace and within their own budget. This new reference option also offers: 24/7 remote access, Circulation of reference content, Cross searching, Expanded searching for difficult-to-find material, and No need for special hardware or an online reader.

"Valuable profiles. This reference series saves the information seeker hours of searching time. The entire series contains such comprehensive coverage not readily available elsewhere that it is recommended for music libraries and as an addition to major reference collections." -- ARBA (American Reference Books Annual) 1999

"For libraries needing biographical information on current and popular musicians, this series is a worthwhile purchase." --ARBA, 2008