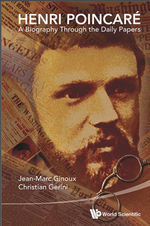 Henri Poincare: A Biography Through The Daily Papers, 1st Edition

On July 17, 2012, the centenary of Henri Poincar's death was commemorated; his name being associated with so many fields of knowledge that he was considered as the Last Universalist. In Pure and Applied Mathematics, Physics, Astronomy, Engineering and Philosophy, his works have had a great impact all over the world. Poincar' acquired in his lifetime such a reputation that, both nationally and internationally, his life and career were made the object of various articles in the daily papers not only in France, but also in the USA. Some of his philosophical concepts have even caused sharp controversies in the Press (as we will discover in this book).This work presents an original portrait of Henri Poincar' based on various press cuttings from The New York Times, The San Francisco Sunday Call, The Times, The Sun, The Washington Post that chronicled unknown anecdotes of his life (for example, his first name was actually not Henri, but Henry; he obtained his high school diploma in sciences with a zero in mathematics, etc.). Such an approach enables the discovering of many forgotten or unknown aspects of his scientific and philosophical works as well as his important role in the public sphere

Front Cover.
Half Title Page.
Title Page.
Copyright Page.
Dedication.
Foreword.
Note from the Translator.
Preface.
Acknowledgments.
Contents.
List of Figures.
1: The Early Years.
2: The Poincaré Family.
3: Childhood and Studies.
4: Inspector of Mines in Vesoul.
5: The Professor and the Savant.
6: From the University of Caen to the Sorbonne.
7: From the Sorbonne to the Académie.
8: The Prize of King Oscar II of Sweden and Norway.
9: The Universal Thinker and The Public Figure.
10: French Geodesy and the Fight Over the Meridian.
11: The Controversy Over the Rotation of the Earth.
12: The Philosophical Work and Its Impact.
13: The Committed Man.
14: The Dreyfus Affair.
15: The Role Model – The Immortal.
16: Last Commitments, Last Works.
17: To Conclude: The Poet of Mathematics.
Bibliography.
Name Index.
Subject Index.