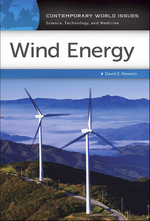 The use of wind power for the generation of electricity holds vast potential for solving the world's energy problems, but numerous technical and social issues must be addressed before that potential can be realized. This handbook will both educate students about current issues related to wind energy and introduce the ways in which mankind has harnessed the wind through the ages. The book covers topics as diverse as early windmills in Europe, the United States, China, and the Middle East; the development of wind farms for electricity generation; and political factors involved in the development of wind energy today. Conventional wind turbine mechanics are explained, as are the technical improvements that drive modern wind turbines and other wind systemsWhat makes the handbook unique is that it combines hard science with perspective pieces that address topics such as potential environmental damage that can result from modern wind technology, and how recent developments in wind turbine technology hold the promise for considerably reducing the cost of this alternate energy source, making it competitive with conventional fossil fuels. Readers will be engaged by extensive discussion of the economic, political, and ethical issues raised by the expanding use of wind energy in the United States and elsewhere, and they will be intrigued by a look at what wind power can mean to the planet's energy future.

Front Cover.
Half Title Page.
Other Frontmatter.
Other Frontmatter.
Title Page.
Copyright Page.
Contents.
List of Tables.
Preface.
1: Background and History.
2: Problems, Controversies, and Solutions.
3: Perspectives.
4: Introduction.
5: Against the Wind: Wind Power Opposition in Australia.
6: Wind Energy: How We Got Here.
7: Why Wind Energy Is Good for America and the World.
8: Small-Scale Wind Power.
9: Where the Winds Don't Stop: High-Altitude Wind Energy Has Big Potential.
10: Siting a Wind Farm.
11: Wind Turbine Syndrome: Health Effects of Noise from Large Wind Turbines.
12: The Careful Planting of Offshore Wind Farms.
13: Notes.
14: Profiles.
15: Data and Documents.
16: Introduction.
17: Data.
18: Table 5.1. Wind Energy Generation (in Megawatt Hours), United States, 2011 and 2012.
19: Table 5.2. States with Largest Installed Wind Power Capacity (in Megawatt Hours), 2011–2012.
20: Table 5.3 Energy Generation by Wind in the United States and Worldwide in (Billion Kilowatt–Hours), 1983–2012. Wind Power–Generating Capacity Has Increased Dramatically Since the Early 1980s, When the First Wind Farms Were Being Established in the United States and Around the World. This Table Shows Some of the Data for This Change.
21: Table 5.4 Wind Energy Budget Allocations, FY 2012, and Requests, FY 2014 (in Thousands of Dollars). Federal Financing for Wind Projects Is Spread Out Through a Number of Federal Agencies. By Far the Largest Portion of That Budget Comes from the Department of Energy, Whose Budget Allocations for Two Recent Years are Shown in This Table.
22: Table 5.5 Candidate Wind Turbine Sites. In 1976, the U.S. Department of Energy Began Collecting Data on Possible Sites for the Installation of Wind Turbines in the United States. That Study was Continued in 1980, After Which a List of So-Called Candidate Sites Has Been Maintained by the Department. A Selection of Those Sites with Relevant Characteristics Is Shown in This Table.
23: Table 5.6 Energy Consumption from Renewables in the United States, Actual and Projected. (Quadrillion Btu) This Table Shows the Amount of Energy Produced from Renewable Sources in the Period from 2009 to 2013, with Projections for 2014 and 2015.
24: Table 5.7 Global Offshore Wind Capacity, as of 2013. The U.S. Department of Energy Conducts an Annual Survey on the Status of Offshore Wind Facilities in the United States and the Rest of the World. This Table Summarizes the General Data for Offshore Wind Farms Globally.
25: Table 5.8 Offshore Wind Policy Highlights for 2013. The Development of New Wind Facilities, Both in the United States and the Rest of the World, Depends to a Considerable Degree on Efforts by National and State Governments to Promote Such Developments. The 2013 Offshore Wind Market and Economics Analysis, Sponsored by the U.S. Department of Energy, Explored the Types of Incentives State and National Governments Have Been Using to Promote Offshore Wind Developments. This Table Summarizes Some of Those Efforts.
26: Table 5.9 Postsecondary Education in Wind Energy. Nearly 200 Degree, Certificate, and Other Educational Programs Are Now Available in Wind Energy in a Variety of Postsecondary Educational Institutions in the United States. This Table Provides Basic Information on a Selection of Those Institutions. See the Source Reference at the End of the Table for a Complete List of Such Institutions.
27: Documents.
28: Energy Policy and Conservation Act of 1975.
29: Renewable Energy and Energy Efficiency Competitiveness Act 1989.
30: Interim Guidelines to Avoid and Minimize Wildlife Impacts from Wind Turbines (2003).
31: Federal Wind Program: Goals (2006).
32: Initiative 937, Washington State (2006).
33: Rankin v. FPL Energy, LLC, 266 S.W.3d 506 (2008).
34: Wildlife Guidelines for Wind Power Facilities, State of Arizona (2009).
35: American Recovery and Reinvestment Act of 2009 (P.L. 111-5).
36: Sowers v. Forest Hills Subdivision, 294 P. 3d 427 (2013).
37: Alliance to Protect Prince Edward County v. Director, Ministry of the Environment (2013).
38: Wind Energy: Additional Actions Could Help Ensure Effective Use of Federal Financial Support, GAO Report 13–136 (2013).
39: Wind Technologies Market Report (2013).
40: Offshore Wind Market and Economic Analysis (2013).
41: Specific Standards for Wind Facilities, State of Oregon (2014).
42: Ostrander Point GP Inc. and Another v. Prince Edward County Field Naturalists and Another, 2014 ONSC #974 (2014).
43: Resources for Further Research.
44: Chronology.
Glossary.
Index.
About the Author.