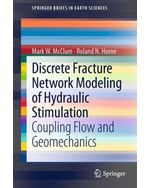 Discrete Fracture Network Modeling of Hydraulic Stimulation describes the development and testing of a model that couples fluid-flow, deformation, friction weakening, and permeability evolution in large, complex two-dimensional discrete fracture networks.  The model can be used to explore the behavior of hydraulic stimulation in settings where matrix permeability is low and preexisting fractures play an important role, such as Enhanced Geothermal Systems and gas shale.  Used also to describe pure shear stimulation, mixed-mechanism stimulation, or pure opening-mode stimulation. A variety of novel techniques to ensure efficiency and realistic model behavior are implemented, and tested.  The simulation methodology can also be used as an efficient method for directly solving quasistatic fracture contact problems.  Results show how stresses induced by fracture deformation during stimulation directly impact the mechanism of propagation and the resulting fracture network.