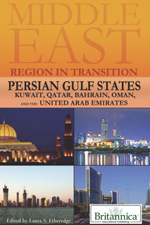 Though smaller than most other Arab countries, the gulf states of Kuwait, Qatar, Bahrain, Oman, and the United Arab Emirates represent some of the most fascinating areas of the Middle East. A blend of traditional and modern, most of these states have become wealthy with oil money, which has allowed them to welcome foreign workers from diverse backgrounds, while retaining their Arab character. This absorbing volume surveys the organization, culture, and history of each of these states and their efforts to balance their ties with the Arab and international communities.