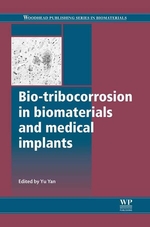 During their service life, most biomaterials and medical implants are vulnerable to tribological damage. In addition, the environments in which they are placed are often corrosive. The combination of triobology, corrosion and the biological environment has been named ‘bio-tribocorrosion'. Understanding this complex phenomenon is critical to improving the design and service life of medical implants. This important book reviews recent key research in this area.After an introduction to the topography of bio-tribocorrosion, Part one discusses different types of tribocorrosion including fatigue-corrosion, fretting-corrosion, wear-corrosion and abrasion-corrosion. The book also discusses the prediction of wear in medical devices. Part two looks at biological effects on tribocorrosion processes, including how proteins interact with material surfaces and the evolution of surface changes due to bio-tribocorrosion resulting from biofilms and passive films. Part three reviews the issue of bio-tribocorrosion in clinical practice, including dental applications and joint replacement as well the use of coatings and test methods for bio-tribocorrosion.With its international team of contributors, Bio-tribocorrosion in biomaterials and medical implants is a standard reference for those researching and developing medical devices as well as clinicians in such areas as dentistry and orthopaedic surgery.