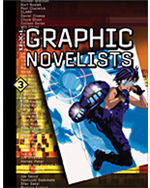 Graphic novels -- novels merging pictures and rich language to create a unique experience of literature and art -- are enjoying a renewed popularity, especially with students and young adults. U·X·L Graphic Novelists introduces researchers to the authors and illustrators behind these works, taking care to define and explore the distinction between comic books and graphic novels. Printed in full-color and covering approximately 75 authors and illustrators in detail, this new set also includes a cumulative table of contents, words to know, timeline, list of works and a detailed cumulative general index.

"This will be a sure winner with students who may be more interested in the lives of these authors than more traditional writers whose classics they are forced to read." -- Reference for Students, January 2007

"For fans of Megatokyo, The Simpsons and Love and Rockets, or for the newcomer to graphic novelists, this well-illustrated guide provides an excellent introduction to the creative spirits behind a bourgeoning new art form." -- John Lawrence, January 2007

"This accessible and readable survey of a timely topic should generate considerable attention in school library media center and public library collections...Coverage is comprehensive, encompassing early examples from Europe, American standards, and current creators of Japanese manga. Well researched and documented, with subject and language appropriate for its intended audience, the set will lend legitimacy to a fast-growing and ever-expanding genre." --Booklist, September 1, 2007

"This well-done set is most suitable for teens and young adults but could be helpful for scholars as a starting point. Numerous comics creator biographies and several collections are available but apparently nothing of similar size and scope." --Library Journal, May 15, 2007

"Attendees at recent book conventions where publishers of graphic novels have grown from a few booths to whole aisles won't be surprised to learn that the Nielsen BookScan reports that the genre grew 35 percent from 2004 to 2005. While few agree on a definition ('long comic books' seems to come closest), most trace its beginnings to Will Eisner's A Contract with God (1978). To help us better understand this burgeoning field, this book profiles 75 notables in the creation of graphic novels." --Library Journal, April 15, 2007

""Unusual in a reference set, this literary biographic encyclopedia offers a warm, lighthearted, and inspirational experience for readers." --Choice, June 2007

"This three-volume work profiles 75 authors, and author/artists of graphic novels, including some of the most influential and celebrated English-language creators...as well as a significant number of Japanese manga artists and writers whom one suspects are just as important in their respective milieu. The profiles are largely biographical in nature, although some limited discussion of the creators' most important works is usually included." --Art Book News Annual 2008

"UXL publications are intended for middle- and high-school students, and this accessible and readable survey of a timely topic should generate considerable attention in school library media center and public library collections. Well researched and documented, with subject and language appropriate for its intended audience, this set is highly recommended." --Booklist, March 15, 2007