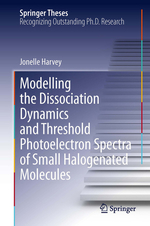 Jonelle Harvey's book outlines two related experimental techniques, threshold photoelectron spectroscopy and threshold photoelectron photoion coincidence techniques, which are utilised to investigate small halogenated molecules. All the experiments were conducted at the vacuum ultraviolet beamline of the Swiss Light Source, a synchrotron photon source, which has the advantage over popular laser photon-sources of extreme ease of tunability. Three studies are presented which combine experimental and computational ab initio approaches: studying the fast dissociations of halogenated methanes in order to construct a self-consistent thermochemical network; investigating the fragmentations of fluoroethenes from timebombs, which break apart very slowly but explosively, to fast dissociators; and uncovering how vital conical interactions underpin both the results of photoelectron spectra and dissociation patterns. The details included in this thesis are useful for researchers working in the same field and those readers wishing to obtain a solid introduction into the types of systems encountered in threshold photoelectron photoion coincidence spectroscopy.