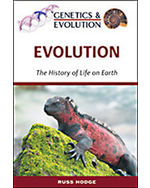 The theory of evolution can be observed anywhere - from exotic tropical rain forests to our own backyards - and is based on three main principles: heredity, variation, and selection. In the 19th century, Charles Darwin and Alfred Russel Wallace sought to explain how these processes work together to produce new species. Evolution provided the first scientific system to investigate the origins and relationships of living creatures, and today it serves as a grand unifying theory, explaining facts that cannot really be accounted for in any other way.

Evolution demonstrates why the theory was necessary, describing it as clearly as possible, in order to show how it has been received by society and to explain the central role that it plays in today's science. This new book also examines the immense impact evolution has had on society and on modern medicine - including the birth of genetic science in the early 1900s and the discovery that genes were made of DNA in the 1950s. Written in clear language, Evolution fills a niche for high school and college students interested in this fascinating topic.