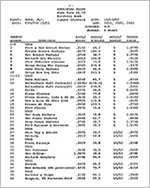 The Union Label and the Needle Trades: Records of the United Garment Workers of America

This collection consists of two full series and one partial series from the Records of the United Garment Workers of America—Series I: Time and Motion Studies; Series III: Office Files, 1899-1994—Meeting Minutes of the General Executive Board subseries; and, Series VIII: Index Card Files for plants and/or locals in. The Time and Motion Studies are made up of time study/ time and motion research files for the garment industry, as well as files relating to industry research and information from the first half of the twentieth century. The minutes from the early period cover issues such as immigration, sick benefits, and nine-hour work days; those from the 1950s are concerned partly with the trial and ultimate dismissal of Board member Joseph Crispino; and those from the latter period contain issues such as the financial struggles and the loss of membership. The overwhelming majority of the Series VIII index card files comprise information on various plants and union locals. These are in alphabetical order by city (with a few exceptions) and contain information about the locals, manufacturers, wages, garments, and efforts to organize locals in those cities.