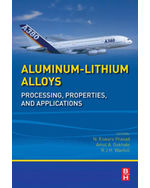 Because lithium is the least dense elemental metal, materials scientists and engineers have been working for decades to develop a commercially viable aluminum-lithium (Al-Li) alloy that would be even lighter and stiffer than other aluminum alloys. The first two generations of Al-Li alloys tended to suffer from several problems, including poor ductility and fracture toughness; unreliable properties, fatigue and fracture resistance; and unreliable corrosion resistance. Now, new third generation Al-Li alloys with significantly reduced lithium content and other improvements are promising a revival for Al-Li applications in modern aircraft and aerospace vehicles. Over the last few years, these newer Al-Li alloys have attracted increasing global interest for widespread applications in the aerospace industry largely because of soaring fuel costs and the development of a new generation of civil and military aircraft. This contributed book, featuring many of the top researchers in the field, is the first up-to-date international reference for Al-Li material research, alloy development, structural design and aerospace systems engineering.