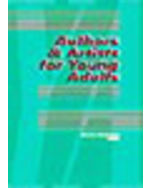 With Authors & Artists For Young Adults teens have a source where they can discover fascinating and entertaining facts about the writers, artists, film directors, graphic novelists, and other creative personalities that most interest them. International in scope, each volume contains 20-25 entries offering personal behind-the-scenes information, portraits, movie stills, bibliographies, a cumulative index and more.

With Authors & Artists For Young Adults, teens have a source where they can discover fascinating and entertaining facts about the writers, artists, film directors, graphic novelists, and other creative personalities that most interest them. International in scope, each volume contains 20-25 entries offering personal behind-the-scenes information, portraits, movie stills, bibliographies, a cumulative index, and more.

"The selection of books is excellent and shows not only knowledge of children's literature but also an understanding of children's reading tastes. A distinguished volume that will be useful in both elementary school libraries and children's rooms as an effective tool for giving reading guidance as well as in evaluating and building library collections." -- ARBA (American Reference Books Annual) 1999 and Library & Information Science Annual 1999

Contents
Introduction.
AAYA Advisory Board.
PETER ABRAHAMS.
Winner of both the Edgar Allan Poe Award and the Agatha Award, this author showcases a clever teenage sleuth in his "Echo Falls" mystery series.
AMELIA ATWATER-RHODES.
First published at the age of fifteen, with the vampire tale In the Forests of the Night, this novelist creates a world ruled by avian shapeshifters in her "Kiesha'ra" fantasy series.
PAOLO BACIGALUPI.
Noted science fiction and fantasy writer whose young adult novel, Ship Breaker, received the prestigious Michael L. Printz Award.
LIBBA BRAY.
This novelist explores Victorian England in her "Gemma Doyle" trilogy and offers satirical takes on contemporary culture in Going Bovine and Beauty Queens.
AIDAN CHAMBERS.
In his "Dance" sequence of interrelated novels, which includes NIK: Now I Know and Postcards from No Man's Land, this British author examines themes of free will, sexuality, and identity.
LUCY CHRISTOPHER.
Welsh-born writer who won the Branford Boase Award for her debut title, Stolen, a tale of survival set in the Australian desert.
CASSANDRA CLARE.
This highly praised author of urban fantasy tales introduces a shadowy otherworld populated by warriors and demons in City of Bones, part of her "Mortal Instruments" trilogy.
SUZANNE COLLINS.
In her dystopian novels The Hunger Games, Catching Fire, and Mockingjay, this bestselling novelist explores issues of morality, war, and political control.
LAUREN CONRAD.
Star of the reality television series The Hills and author of the works in the popular "L.A. Candy" trilogy.
WILL COTTON.
Celebrated artist who captivates audiences with his richly colored paintings of lush, decadent, candy-coated landscapes.
MELISSA DE LA CRUZ.
The lifestyles of the rich and famous-both human and supernatural-are the focus of this writer's "Au Pairs" and "Blue Bloods" series of young adult novels.
SARAH DESSEN.
Respected author who features teen protagonists struggling with life-altering situations in works such as Dreamland, Lock and Key, and What Happened to Goodbye.
JOHN C. FORD.
In his debut novel, The Morgue and Me, this writer presents a contemporary take on the classic detective story.
SONYA HARTNETT.
Recipient of Sweden's Astrid Lindgren Memorial Award for literature, the first Australian writer to earn that honor.
STEVEN HERRICK.
Australian poet and novelist best known for his critically acclaimed verse novels, including By the River, Cold Skin, and The Wolf.
PHILLIP HOOSE.
Conservationist and author of nonfiction titles, such as The Race to Save the Lord God Bird and Claudette Colvin, winner of the National Book Award.
ANGELA JOHNSON.
Distinguished African-American author of children's books, short stories, and young adult novels, including her "Heaven" trilogy, set in small-town Ohio.
JOE LETTERI.
Academy Award-winning special effects wizard recognized for his work on such blockbuster films as The Lord of the Rings: The Return of the King, King Kong, and Avatar.
BRYAN LEE O'MALLEY.
Creator of the "Scott Pilgrim" series of graphic novels, which has received a Harvey Award and an Eisner Award, two of the industry's top honors.
MAL PEET.
In Keeper, The Penalty, and Exposure, this British writer uses the sport of soccer as a metaphor for larger cultural and societal issues.
CAROL PLUM-UCCI.
Young adult novelist whose teen protagonists, in works like The Body of Christopher Creed and Fire Will Fall, are forced to revisit their pasts when tragedy strikes.
MICHAEL SCOTT.
This prolific Irish author portrays characters drawn from myth, legend, and history in his "Secrets of the Immortal Nicholas Flamel" series.
SARA SHEPARD.
Author of suspenseful, entertaining young adult novels, including the works in her "Pretty Little Liars" mystery series.
MAGGIE STIEFVATER.
In Shiver and other works in her "Wolves of Mercy Falls" series, this fantasist updates the conventions of the werewolf genre.
FRANCISCO X. STORK.
A native of Mexico, this author addresses religion, cultural identity, and alienation in such works as Marcelo in the Real World and The Last Summer of the Death Warriors.
TAYLOR SWIFT.
Country and pop music superstar who charms listeners with her autobiographical tales of teenage heartbreak and friendship, found on chart-topping albums such as Fearless and Speak Now.
JANNE TELLER.
Highly regarded Danish writer whose young adult novel, Nothing, explores existential issues through the eyes of an introspective thirteen year old.
KATE THOMPSON.
Blending elements of myth and realism, this British-born writer has earned accolades for her imaginative tales, including the "Switchers" and "New Policeman" trilogies.
MELISSA WYATT.
In Raising the Griffin and Funny How Things Change, this novelist introduces appealing characters who must make difficult choices about their futures under trying circumstances.
SARA ZARR.
This writer examines the power of memory and the importance of family in Sweethearts, Once Was Lost, and Story of a Girl, a National Book.
Award finalist.
Author/Artist Index.