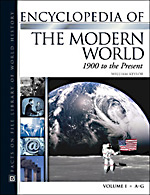 Covering the beginnings of the 20th century up to the present day with great detail and depth, Encyclopedia of the Modern World contains more than 8,000 entries of comprehensive information unavailable in any other similar work.