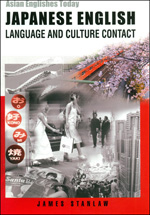 Gives an in-depth analysis of the use of the English language in modern Japan. It explores the many ramifications the Japanese-English language and culture contact situation has for not only Japanese themselves, but also others in the international community.