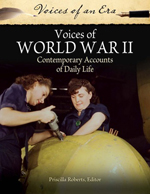 This book collects a wide variety of primary-source documents drawn from across the United States, Europe, and Asia that illuminate the events and experiences of World War II -- the most devastating war in human history.