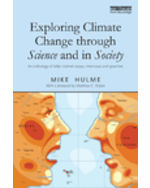 Mike Hulme has been studying climate change for over thirty years and is today one of the most distinctive and recognisable voices speaking internationally about climate change in the academy, in public and in the media. The argument that he has made powerfully over the last few years is that climate change has to be understood as much as an idea situated in different cultural contexts as it is as a physical phenomenon to be studied through universal scientific practices. Climate change at its core embraces both science and society, both knowledge and culture.

Hulme's numerous academic and popular writings have explored what this perspective means for the different ways climate change is studied, narrated, argued over and acted upon. Exploring Climate Change through Science and in Society gathers together for the first time a collection of his most popular, prominent and controversial articles, essays, speeches, interviews and reviews dating back to the late 1980s. The 50 or so short items are grouped together in seven theme? Science, Researching, Culture, Policy, Communicating, Controversy, Future? and within each theme are arranged chronologically to reveal changing ideas, evidence and perspectives about climate change. Each themed section is preceded with a brief introduction, drawing out the main issues examined. Three substantive unpublished new essays have been specially written for the book, including one reflecting on the legacy of Climategate.

Taken as a collection, these writings reveal the changes in scientific and public understandings of climate change since the late 1980s, as refracted through the mind and expression of one leading academic and public commentator. The collection shows the many different ways in which it is necessary to approach the idea of climate change to interpret and make sense of the divergent and discordant voices proclaiming it in the public sphere.

Front Cover.
Other Frontmatter.
Title Page.
Copyright Page.
Contents.
List of Illustrations.
Foreword.
Preface and Acknowledgements.
Articles by Chronology.
Articles by Category.
The Public Life of Climate Change.
Science.
1: Introduction.
2: Sahel Awaits the Rain.
3: Sea Heat Fuels Hurricanes.
4: Cold Facts about Winters.
5: Nuclear Autumn Danger.
6: Generalists in Hot Pursuit.
7: Global Warming in the Twenty-First Century: An Issue for Less Developed Countries.
8: How Good is Technology's Weather Eye?.
9: Introducing Climate Change.
10: Climate of Uncertainty.
11: There is No Longer such a Thing as a Purely Natural Weather Event.
12: Something to Clear the Air.
13: To What Climate are We Adapting?.
14: Do We Need Better Predictions to Adapt to a Changing Climate?.
15: On the Origin of the Greenhouse Effect: John Tyndall's 1859 Interrogation of Nature.
Researching.
16: Introduction.
17: Launching the Tyndall Centre.
18: The Tyndall Centre, Inter-disciplinary Research and Funding.
19: The Appliance of Science.
20: Geographical Work at the Boundaries of Climate Change.
21: Mapping Climate Change Knowledge.
22: Meet the Humanities.
Culture.
23: Introduction.
24: Rainbows in the Greenhouse.
25: On John Constable's Cloud Study (1822).
26: Climate Security: The New Determinism.
27: A Cultural History of Climate.
28: Learning to Live with Re-created Climates.
29: A Town Called Bygdaby.
Policy.
30: Introduction.
31: Whistling in the Dark.
32: Choice is All.
33: Pie in the Sky Tops this G8's Wish List.
34: A Non-Skeptical Heresy: Taking the Science Out of Climate Change.
35: The Limits of the Stern Review for Climate Change Policy-Making.
36: Setting Goals for Global Climate Governance: An Inter-Disciplinary Perspective.
37: Climate Refugees: Cause for a New Agreement?.
38: Moving Beyond Climate Change.
39: Climate Intervention Schemes Could be Undone by Geopolitics.
40: On the ‘Two Degrees’ Climate Policy Target.
Communicating.
41: Introduction.
42: Chaotic World of Climate Truth.
43: Less Heat, More Light, Please.
44: What was the Copenhagen Climate Change Conference Really About?.
45: Climate Change: No Eden, No Apocalypse.
46: Heated Debate.
47: You've been Framed.
Controversy.
48: Introduction.
49: Top British Boffin: Time to Ditch the Climate Consensus.
50: ‘Show Your Working’: What Climategate Means.
51: The Science and Politics of Climate Change.
52: A Changing Climate for the IPCC.
53: Climategate, Scientific Controversy and the Politics of Climate Change.
54: The IPCC on Trial: Experimentation Continues.
55: The Year Climate Science was Redefined.
56: After Climategate … Never the Same.
Futures.
57: Introduction.
58: Forty Ways to Change A World Climate.
59: Save the World Without Being An Eco-Bore.
60: Climate Change: From Issue to Magnifier.
61: Amid the Financial Storm: Re-Directing Climate Change.
62: A Bleak Analysis.
Reactions to Why We Disagree About Climate Change.
Bibliography.
Index.