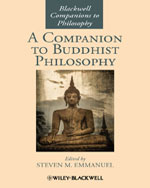 A Companion to Buddhist Philosophy is the most comprehensive single volume on the subject available; not only does the Companion offer the non-specialist an in-depth introduction to the central concepts of Buddhism, it presents extensive discussions of Buddhist social and political thought, contemplative practice, issues in applied ethics, and Buddhist social activism. The contributors list for the Companion includes leading scholars in the field; each engages the latest scholarship to create a wide-ranging survey of the most important ideas, problems, and debates in Buddhist philosophy. The volume will expand readers understanding of the breadth and diversity of Buddhist thought, with many of the chapters written from a comparative perspective. A conscious effort has been undertaken throughout the volume to create a mainstream bridge between the Western and Buddhist philosophical traditions. The broad coverage of Buddhist thought offers a great deal of flexibility to instructors and students, presenting the most versatile single-volume sourcebook available for constructing a customized syllabus on Buddhist philosophy or comparative philosophical thought.

Front Cover.
Half Title.
Blackwell Companions to Philosophy.
Title Page.
Copyright Page.
Dedication.
Contents.
Notes on Contributors.
Acknowledgments.
List of Abbreviations.
Introduction.
1: Conceptual Foundations.
2: The Philosophical Context of Gotama's Thought.
3: Dukkha, Non-Self, and the Teaching on the Four “Noble Truths”.
4: The Conditioned Co-arising of Mental and Bodily Processes within Life and Between Lives1.
5: Major Schools of Buddhist Thought.
6: Theravāda.
7: Indian Mahāyāna Buddhism.
8: Tibetan Mahāyāna and Vajrayāna.
9: East Asian Buddhism.
10: Themes in Buddhist Philosophy.
11: Metaphysics.
12: Metaphysical Issues in Indian Buddhist Thought.
13: Emptiness in Mahāyāna Buddhism Interpretations and Comparisons.
14: Practical Applications of the Perfection of Wisdom Sūtra and Madhyamaka in the Kālacakra Tantric Tradition.
15: The Huayan Metaphysics of Totality.
16: Forms of Emptiness in Zen.
17: Between the Horns of Idealism and Realism The Middle Way of Madhyamaka.
18: Epistemology.
19: A Survey of Early Buddhist Epistemology.
20: Reason and Experience in Buddhist Epistemology.
21: The Three Truths in Tiantai Buddhism.
22: “Spiritual Exercise” and Buddhist Epistemologists in India and Tibet.
23: Yogic Perception, Meditation, and Enlightenment The Epistemological Issues in a Key Debate.
24: Language and Logic.
25: Language and Logic in Indian Buddhist Thought.
26: Buddhist Philosophy of Logic.
27: Candrakīrti on the Limits of Language and Logic.
28: On the Value of Speaking and Not Speaking Philosophy of Language in Zen Buddhism.
29: The Voice of Another Speech, Responsiveness, and Buddhist Philosophy.
30: Philosophy of Mind.
31: Mind in Theravāda Buddhism.
32: Philosophy of Mind in Buddhism.
33: Cognition, Phenomenal Character, and Intentionality in Tibetan Buddhism.
34: The Non-Self Theory and Problems in Philosophy of Mind.
35: Ethics and Moral Philosophy.
36: Ethical Thought in Indian Buddhism.
37: Character, Disposition, and the Qualities of the Arahats as a Means of Communicating Buddhist Philosophy in the Suttas.
38: Compassion and the Ethics of Violence.
39: Buddhist Ethics and Western Moral Philosophy.
40: Social and Political Philosophy.
41: The Enlightened Sovereign Buddhism and Kingship in India and Tibet.
42: Political Interpretations of the Lotus Sūtra.
43: Socially Engaged Buddhism Emerging Patterns of Theory and Practice.
44: Comparative Reflections on Buddhist Political Thought Aśoka, Shambhala, and the General Will.
45: Buddhist Meditation.
46: Buddhist Meditation Theory and Practice.
47: Seeing Mind, Being Body Contemplative Practice and Buddhist Epistemology.
48: From the Five Aggregates to Phenomenal Consciousness Towards a Cross-Cultural Cognitive Science.
49: Contemporary Issues and Applications.
50: Buddhism and Environmental Ethics.
51: Buddhism and Biomedical Issues.
52: War and Peace in Buddhist Philosophy.
53: Buddhist Perspectives on Human Rights.
54: Buddhist Perspectives on Gender Issues.
55: Diversity Matters Buddhist Reflections on the Meaning of Difference.
Further Reading.
Index.