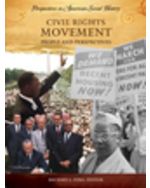 Freedom. Equality. Democracy. They are the quintessential American values defined at the nation's birth in the Declaration of Independence, the Constitution, and the Bill of Rights. And yet it took the broad-based movement of individuals from all facets of American society in the mid-20th century to establish firmly that those values apply to all U.S. citizens, regardless of race.

This revealing volume looks at the struggle for individual rights from the social historian's perspective, providing a fresh context for gauging the impact of the civil rights movement on everyday life across the full spectrum of American society.

From the landmark Brown v. Board of Education case to protests against the Vietnam War to the fight for black power, Civil Rights Movement: People and Perspectives looks at events that set the stage for guaranteeing America's promise to all Americans. In eight chapters, some of the country's leading social historians analyze the most recent investigations into the civil rights era's historical context and pivotal moments. Readers will gain a richer understanding of a movement that expanded well beyond its initial focus (the treatment of African Americans in the South) to include other Americans in regions across the nation.