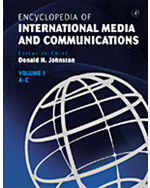 The media, historically acting as educator, information conduit and societal watchdog, play a pivotal role in providing the information people need and the explanations that decipher their worlds. Now that the global communications system is its most complex, there is great anxiety about the ways that the media will be controlled and used.

This four-volume set offers an interdisciplinary on political, technological, psychological, cultural, and economic aspects of media and communications on the international scene. By systematically cataloging information about world media, Encyclopedia of International Media and Communications sorts out the ways information -- our era's increasingly valuable commodity -- is generated, distributed and used.