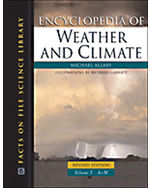 In the years since the first edition of the award-winning Encyclopedia of Weather and Climate was published, research in the atmospheric sciences has been intense and much has happened - making this revised edition an essential one. This two-volume set has also been restructured - featuring a mix of new, expanded, updated, and rewritten entries along with new photographs and updated, redesigned line illustrations - to take into account recent discoveries about the atmosphere and the way it works.

The main body of the encyclopedia consists of authoritative entries describing processes such as cloud formation, atmospheric phenomena such as rainbows, and some of the techniques and instruments used to study the atmosphere, as well as the units of measurement that scientists use. The extensive coverage also includes the classification systems that are used for climate types, winds, and clouds. Ten appendixes contain invaluable supplementary material - such as biographical notes on scientists and lists of the most severe tropical cyclones and tropical storms, weather disasters, and milestones in atmospheric research. These accessible appendixes also include chronologies, the geologic time scale, SI units and conversions, and more.