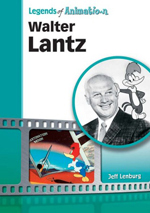 Ten-time Oscar-nominated Walter Lantz was one of Hollywood's most prolific directors and producers of animation. Over six decades, his studio produced more than 800 cartoons, including over 600 theatrically released cartoons, more than any other Hollywood animation studio, and set high standards for the art of animation in its fledgling years. Lantz is renowned for producing cartoons starring the world-famous Woody Woodpecker, whose distinctive laugh is enshrined in the Smithsonian Institute, but he began his career during the silent picture era when he worked on the landmark animated series, Oswald the Lucky Rabbit. Influencing generations of animators, Lantz also created and/or produced a family of popular characters, including Andy Pandy, Buzz Buzzard, Chilly Willy, Gabby Gator, Inspector Willoughby, and Wally Walrus.

Front Cover.
Half Title Page.
Other Frontmatter.
Title Page.
Copyright Page.
Dedication.
Contents.
Acknowledgments.
1: Drawing for Laughs.
2: Winning over His Rivals.
3: Staking His Claim Out West.
4: Knock-Knocking His Way to the Top.
5: Returning to the Helm.
6: Taking His Act to Television.
7: The Last Reel.
Selected Resources.
Selected Bibliography.
Index.
About the Author.