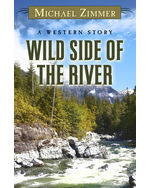 Wild Side of the River: A Western Story, 1st Edition

Ethan Wilder has been off in the mountains hunting for the last several months. He is the eldest son of Jacob Wilder‚ owner of the Bar Five Ranch. Jacob runs a few head of cattle to pay the bills and keep the family stocked in what can’t be raised‚ hunted‚ or traded for. Some of the newer citizens in this part of Montana Territory claim the only thing Jacob Wilder can raise with any success is hell and sons — he has three of them in addition to Ethan. Like father‚ like sons.

"A man's single-minded quest for vengeance is a traditional western theme, but this one doesn't feel like a traditional western. It's darker, harder around the edges, a noir crime drama wearing western clothing. Ethan Wilder is a two-fisted 1940s antihero transported to the Wild West, and fans of both noir and westerns should give this book thumbs-up." -- Booklist Review, January 2011

“Ethan Wilder is a two-fisted 1940s antihero transported to the Wild West‚ and fans of both noir and westerns should give this book thumbs-up.”— Booklist