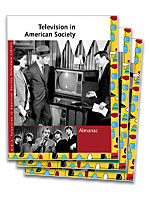 The three-volume set shows how television has reflected and influenced American society and culture throughout its history, covering both positive and negative effects. This Library includes more than 180 interesting illustrations and sidebars, clear prose, and ideas for activities, research and further reading. A subject index, chronology and words-to-know section are among the many other features supporting student achievement.

The Almanac looks at the history of television chronologically, starting with the introduction of the technology in the 1920s and ending with issues that face the industry in the 21st century as well as its future outlook.

The Primary Sources presents fifteen full or excerpted documents relating to the development and impact of television. These documents range from notable speeches that mark important points in TV history to critical analyses of television's influence on American culture. The documents are arranged chronologically, beginning with longtime RCA chairman David Sarnoff's 1936 remarks to the press at his company's first demonstration of television technology, and ending with former vice president Al Gore's 2005 speech about the effects of television on democracy.

"This three-volume set, unmatched in its sociological treatment of the topic for a young adult audience, is an ideal place for students to begin research on the topic or for teachers to use in lesson planning. This resource is not a biased or superficial celebration of the wonders of television, but a distinct - if compact - acknowledgement of its enormous impact. Recommended for public and school libraries." --Library Journal, May 1, 2007

"A thorough and fact-rich historical background accompanies each document, and advanced vocabulary or concepts are defined in the margins. Bottom Line: This resource is not a biased or superficial celebration of the wonders of television, but a distinct - if compact - acknowledgement of its enormous impact. Recommended for public and school libraries." --Library Journal, May 1, 2007

"In short, this is a unique, valuable source that supplies accurate, up-to-date information for libraries serving students in junior and senior high schools and, in some cases, junior colleges." --ARBA, March 2007

"Your American history and current events teachers and students in middle through high school will enjoy these volumes. Students will be willing to read them because of their content. Teachers and students who study television in any class will find these very interesting, and those teaching the background of today's events will have a great introduction to the phenomenon of television on culture in our lives." --Reference for Students, May 2007