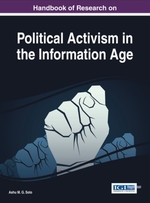 Handbook of Research on Political Activism in the Information Age, 1st Edition

Technology, and particularly the Internet, has caused many changes in the realm of politics. Mainstream media no longer has a monopoly on political commentary as social media, blogs, and user-generated video streaming sites have emerged as an outlet for citizens and political activists to openly voice their opinions, organize political demonstrations, and network online. The Handbook of Research on Political Activism in the Information Age includes progressive research from more than 39 international experts at universities and research institutions across 15 different countries. Each of the 25 scholarly chapter contributions focus on topics pertaining to the application of information technology, engineering, and mathematics to political activism. Through its analysis of the methods for political activism in the information age, the effectiveness of these methods, as well as emerging analytical tools, this book is designed for use by researchers, activists, political scientists, engineers, computer scientists, journalists, professors, students and professionals working in the fields of politics, e-government, media and communications, and Internet marketing.

Front Cover.
Title Page.
Copyright Page.
Advances in Human and Social Aspects of Technology (AHSAT) Book Series.
Titles in this Series.
Editorial Advisory Board.
List of Contributors.
Table of Contents.
Detailed Table of Contents.
Preface.
1: Political Information, Political Power, and People Power: New Media and New Social Movements in the Arab Spring.
2: Social Media for Political Change: The Activists, Governments, and Firms Triangle of Powers During the Arab Movement.
3: The Potential of Political Changes in the Information Age: The Political Challenges Sphere of Saudi Arabia Through Citizen Activism.
4: Identifying Hyperlink Strategies as a Tool to Discover the Connections Between Offline and Online Politics.
5: Cleavages and Links: Mapping Linking Patterns Between Israeli Political Websites.
6: Information and Communication Technologies, Democracy, and Human Rights in Nigeria.
7: Memory, National Identity, and Freedom of Expression in the Information Age: Discussing the Taboo in the Zimbabwean Public Sphere.
8: The Virtual Parallax: Imaginations of Mthwakazi Nationalism – Online Discussions and Calls for Self-Determination.
9: The Opportunities and Challenges of Using Email for Political Communication in Authoritarian States: A Case of Zimbabwe’s Media Monitoring Project.
10: Alternative Media Bridging the Digital Divide in Malaysia: Case Study of Sarawakreport.org.
11: Politics 2.0 with Facebook.
12: The Wisconsin Spring.
13: The Language of Threat in Our Political Discourse.
14: Conceptualizing Network Politics Following the Arab Spring.
15: The India Against Corruption Movement.
16: Corruption in the Public Eye: From Transparency to Publicity.
17: Civic Cultures and Skills in European Digital Rights Campaigning.
18: Protesting in a Cultural Frame: How Social Media was Used by Portuguese “Geração à Rasca” Activists and the M12M Movement.
19: Two Models of Online Petitioning in the United Kingdom.
20: Googling Democracy: A Comparison of Democracy Promoters on the Internet.
21: A New Republic of Letters?: The Promise and Potential of the Internet.
22: From Politics to E-Politics: Updating Saul Alinsky’s Community Organising Model to Meet the Challenges and Opportunities of Politics in the Information Age.
23: The Internet, National Citizenship, and the “Sovereignty Paradox”: Asylum-Seeking Migrants’ Political Agency and “Technologized” Citizenship.
24: Interaction of Incivility and News Frames in the Political Blogosphere:Consequences and Psychological Mechanisms.
25: How [Not] to Caffeinate a Political Group: Parent Post Influence on Conversational Network Structure.
Compilation of References.
About the Contributors.
Index.