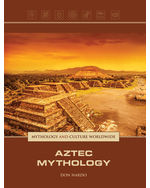 This new title in the Mythology and Culture Worldwide Series discusses the origins of Aztec myths and how some of these myths have been manipulated over time. The book details the major gods found within the mythology along with some of the most memorable tales, such as creation of the world and the making of humanity. The title ends with how Aztec myths have penetrated popular culture.

Introduction: Altering the Past to Explain the Present.
Chapter 1: Enchanted Vision: The Aztecs and Their Gods.
Chapter 2: Life Out of Death: The Creation of the World.
Chapter 3: Descent into Hell: The Making of Humanity.
Chapter 4: Great Journey: The Legend of Aztec Origins.
Chapter 5: Plumed Serpent: Aztec Myths in Pop Culture.