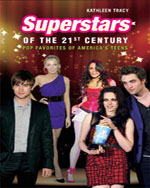 Who are the superstar icons of the new century-the singers and actors who are captivating today's audiences? Get to know them in this exciting and informative new resource. In a series of biographical essays, Superstars of the 21st Century: Pop Favorites of America's Teens explores the lives of these extraordinary talents, giving readers an up-close look at their upbringings and families, their professional beginnings, and the remarkable accomplishments of their careers.

Did you know singing star Rhianna was a member of her high school military cadet corps? That despite earning millions for her movie roles, Dakota Fanning has never received an allowance? That Twilight's Robert Pattinson was routinely dressed up as a girl by his sisters? The biographies included in Superstars of the 21st Century are filled with little-known facts like these, as well as career highlights and real insights into the daily lives of this generation's iconic figures.