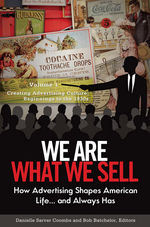 We Are What We Sell: How Advertising Shapes American Life. . . and Always Has, 1st Edition

In the United States, advertising has carved out an essential place in American culture, and advertising messages undoubtedly play a significant role in determining how people interpret the world around them. This three-volume set examines the myriad ways that advertising has influenced many aspects of 20th-century American society, such as popular culture, politics, and the economy. Advertising not only played a critical role in selling goods to an eager public, but it also served to establish the now world-renowned consumer culture of our country and fuel the notion of "the American dream." The collection spotlights the most important advertising campaigns, brands, and companies in American history, from the late 1800s to modern day. Each fact-driven essay provides insight and in-depth analysis that general readers will find fascinating as well as historical details and contextual nuance students and researchers will greatly appreciate. These volumes demonstrate why advertising is absolutely necessary, not only for companies behind the messaging, but also in defining what it means to be an American.

Front Cover.
Half Title Page.
Title Page.
Copyright Page.
Contents.
Acknowledgments.
Creating Advertising Culture, Beginnings to 1930s.
1: A Revolution in Advertising: “Buy American” Campaigns in the Late Eighteenth Century.
2: The Redemption of Advertising: The Advertising Business in the Early 1900s.
3: Cartoon Icons: The Michelin Man, Morton Salt Umbrella Girl, and Mr. Peanut.
4: Advertising and the Great Depression.
5: P&G's Chipso Magic: Stretching the Dollar and Making Life Easier in Depression-Era America.
6: From Picaninny to Savage Brute: Racialized Images and African American Stereotyping in Turn-of-the-Century American Advertising.
7: Selling the American Dream: The West.
8: The Shopping Metropolis: Defining the American Consumer.
9: Reach for a Lucky Instead of a Sweet: An Exploration of Early Cigarette Advertising.
10: Extra! Extra! Read All about It: Early Newspaper Advertising.
11: “Ambitious Girls!”: Making and Contradicting the Ideal Woman through Advertisements in the Ladies' Home Journal, 1890–1920.
12: Product Placement in the Golden Age of Radio: Or Why Tina Fey Owes a Debt of Gratitude to Jack Benny.
13: Early Automobile Advertising.
14: Kimberly-Clark: Transforming Advertising Taboos.
15: Keeping Consumers Clean: Ivory Soap.
16: Burma-Shave and Mail Pouch Barns Turn the Countryside Commercial.
17: Coca-Cola and Christmas.
18: Political Advertising.
19: The Rise of the Birth-Control Industry, or When Contraception Became Obscene in America.
20: The “Mark of Honor”: Trademark Law, Goodwill, and the Early Branding Strategies of National Biscuit.
About the Editors and Contributors.
Volume 1 Index.
Title Page.
Contents.
Advertising at the Center of Popular Culture, 1930s–1975.
1: Recipe for Success: Jean Wade Rindlaub's Influence on American Women's Ideals.
2: The New American Splendor: Building the New Consumer Culture after World War II.
3: Soap Operas and Sponsors in Mid-Century America.
4: Account Planning: An Overview of Its Inception and Evolution.
5: Advertising's Role in Social Consciousness: The “Crying Indian” and More.
6: Latino Advertising, Spanish-Language Media, and the Creation of a Pan-Ethnic Cultural Identity.
7: From “Lost Manhood” to “Erectile Dysfunction”: The Commercialization of Impotence.
8: Ding Dong! Avon Calling! Selling Beauty and Femininity in the Cold War.
9: You've Come a Long Way, Baby: Analysis of Marketing Cigarettes to Women.
10: Selling Booze and Beer.
11: Commodification and the Counterculture.
12: Hippies, the Counterculture, and Rebellion in Advertising.
13: Early Magazine Advertising, 1930–1970.
14: Representing American Values: How Magazine Advertising Reflected and Shaped Values in America.
15: Early Television Advertising.
16: The Big Business of Fashion Advertising.
17: Pepsi and Young America.
18: “Peddle” to the Metal: NASCAR Sponsorship and Advertising.
19: Sinclair's “Dino” and Petroleum Advertising at the Infancy of the Interstate Highway System.
20: Selling the Cold War: Advertising, NSC 68, and the Military-Industrial Complex.
21: Eisenhower and Political Advertising.
22: Kennedy and Political Advertising.
23: Countdown to the Apocalypse: Lyndon B. Johnson's “Daisy” Ad.
24: Early Computer Marketing: From Deification to Humanizing of Computers.
25: The Decade of the Slogan: The 1970s.
About the Editors and Contributors.
Volume 2 Index.
Title Page.
Contents.
Advertising in the Contemporary Age.
1: Mad Men: Framing Advertising History.
2: David Ogilvy: Selling an Industry.
3: Creating Celebrity through Advertising, and the Role of the Account Planner.
4: “I Hate the Way My Hair Looks”: Controversies in Advertising to Women and Girls.
5: Controversy in Advertising to Children.