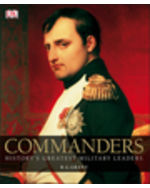 COMMANDERS focuses on the greatest leaders in naval, field, and aerial warfare. From Alexander the Great's conquest of the known world to the generals leading today's campaigns in Afghanistan, the book casts new light on the leaders who have forged history on the battlefield. Famous historical commanders, such as Julius Caesar, Napoleon, and Horatio Nelson, are considered in depth, along with their subordinates and enemies. Commanders from outside the Western tradition are also examined, including the great Chinese, Japanese, Indian, Native American, and African leaders.