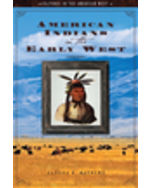 More than 500 Indian nations once existed in the lands that become the United States, many in what would become the American West. But conflicts with expansionist Americans were not the first threats to their sovereignty. For nearly 300 years before the birth of the United States, Indian nations clashed with colonizers from the West (Spain and France) and East (Russia).

American Indians in the Early West offers a concise guide to the development of American Indian communities, from the first migrations through the arrival of the Spanish, French, and Russians, to the appearance of Anglo-American traders in the easternmost portions of the West around 1800.

With coverage divided into periods and regions, American Indians in the Early West looks at how Indian communities evolved from hunter-gatherers to culturally recognized tribes, and examines the critical encounters of those tribes with non-Natives over the next two-and-a-half centuries. Readers will see that the issues at stake in those encounters - political control, preserving traditions, land and water rights, resistance to economic and military pressures - are very relevant to the Native American experience today.

Front Cover.
Half Title Page.
Editorial Page.
Title Page.
Copyright Page.
Contents.
Cultures in the American West.
Preface.
Maps.
1: Origins and Migrations.
2: The Rio Grande Valley and Beyond.
3: From the Pacific to the Gulf of Mexico.
4: From the Saint Lawrence and Great Lakes to the Rocky Mountains.
5: From the Aleutian Chain to Northern California.
6: Historiography and Major Issues in the Study of American Indian History.
7: Chronology.
Glossary.
Select Bibliography.
Index.
About the Author.