The beginnings of American Presbyterian mission work in India antedate the organization of the Board of Foreign Missions. In 1834, William Reed and J. C. Lowrie arrived in India under the auspices of the Western Foreign Missionary Society, the Board's predecessor, and established a station at Ludhiana. Two years later, stations were opened in Saharanpur, Sabathu, and Allahabad. In 1840, the India Mission was subdivided into the Punjab Mission, which encompassed the original four stations, and the North India Mission, also known as the Farukhabad Mission.

The work of the Presbyterian Church in India reflected the Church's concern for the educational, medical, and spiritual needs of the Indian people. Coordination of the three missions' activities in these areas was directed by the India Council after 1913, while considerable interdenominational cooperation existed as well.

Medical work was carried out through a variety of hospitals, dispensaries, clinics, sanitariums, and leper asylums. Institutions such as the Wanless Chest Hospital in Miraj, the Philadelphia Hospital in Ambala, and the Fatehgarh Memorial Hospital serve as monuments to the medical work done by the Presbyterian Church in India. Evangelism in India took the form primarily of village itineration where male and female missionaries ministered to the spiritual needs of the populace while simultaneously attending to their medical and educational needs.

The collection documents the Board of Foreign Missions' tripartite ministry (Farukhabad, Punjab, and the West Indian missions) in India but also reflects the development of the modern Indian state in a broader sense. Reaction to foreigners generally and Protestant missionaries specifically, discontent with British rule and the development of the Independence movement, and racial and internecine religious warfare between Hindu and Muslim populations are well documented. 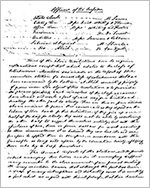