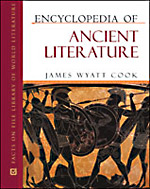 Encyclopedia of Ancient Literature features more than 500 entries covering the literary works, writers, and concepts of the ancient world, from the beginnings to approximately 500 CE. Ranging from ancient Greece and Rome to China, Egypt, Japan, India, Persia, Babylonia, the Hebrew world, and more, this accessible A-to-Z encyclopedia provides students with an extensive overview of this period of literature. Coverage includes: