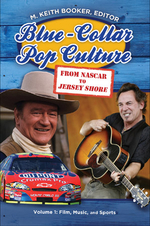 Blue-Collar Pop Culture: From NASCAR to Jersey Shore provides a sophisticated, accessible, and entertaining examination of the intersection between American popular culture and working-class life in America. Covering topics as diverse as the attacks of September 11th, union loyalties, religion, trailer parks, professional wrestling, and Elvis Presley, the essays in this two-volume work will appeal to general readers and be valuable to scholars and students studying American popular culture.