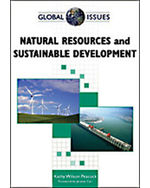 There are more than 6 billion people living on Earth today, and the United Nations predicts that this number will surge to 9.1 billion by the year 2050. However, the natural resources necessary to sustain the world's population - including freshwater, arable land, and fossil fuels - are dwindling. In order to achieve sustainable development, the stress exerted on the environment by the world's population will have to be controlled through reduced rates of consumption.

What steps must be taken to reduce humanity's global footprint and keep within the boundary of the planet's carrying capacity? What are the strategies that governments can pursue to reduce population growth and energy consumption and to preserve and increase the supply of freshwater and energy resources? Natural Resources and Sustainable Development explores the impact that overconsumption has had on natural resources as well as possible alternative strategies in the United States, China, India, Germany, and Brazil.