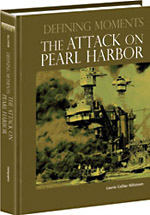 Defining Moments: The Attack on Pearl Harbor provides users with a detailed and authoritative overview of the events of December 7, 1941, as well as background on the principal figures involved in this pivotal episode in U.S. history. The preparation and arrangement of this volume reflects an emphasis on providing a thorough and objective account of events that shaped our nation, presented in an easy-to-use reference work. It is divided into three primary sections. The first of these sections, the Narrative Overview, provides a detailed, factual account of the Pearl Harbor attack and the war in the Pacific. This section also covers the dramatic events of December 7, 1941, from the shocking appearance of enemy aircraft in the skies over Hawaii to the scenes of chaos, destruction, and heroism that occurred at Pearl Harbor and surrounding military facilities. Finally, this section chronicles America’s hard-fought victory over Japan in the Pacific during World War II and explores the legacy of Pearl Harbor in the postwar development of both nations.

The second section, Biographies, provides valuable biographical background on leading figures involved in the events of December 7, 1941, including Mitsuo Fuchida, Husband E. Kimmel, Doris Miller and Isoroku Yamamoto. Each biography concludes with a list of sources for further information on the profiled individual.

The third section, Primary Sources, collects essential and illuminating documents related to the attack on Pearl Harbor. This diverse collection includes the detailed Japanese attack plan; dramatic firsthand accounts of the attack from a Japanese pilot, an American sailor, and a high-school student caught in the crossfire; President Franklin D. Roosevelt’s famous "Day of Infamy" speech; and the instrument of Japanese surrender that marked the end of World War II.