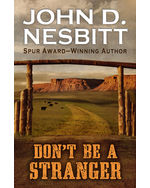 Don't Be A Stranger, 1st Edition

Elwood Lawrence‚ top hand at the Crown Butte ranch‚ tries to find out where the cattle are disappearing to. It looks like an inside job. His work becomes complicated when he develops an interest in a woman who comes to visit the ranch‚ and behind it all is the disappearance of a flashy stranger who is said to be a bank robber.

As Elwood continues to track down the cattle rustling‚ unknown enemies sabotage him‚ and take shots at him. The mystery of the missing bank robber has not gone away‚ and Elwood realizes there is more at stake than a few stolen cattle. One gunman after another comes after him‚ and to get to the bottom of things he has to go to the outlaw lair.