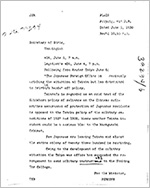 Political Relations and Conflict between Republican China and Imperial Japan, 1930–1939: Records of the U.S. State Department

The Nationalist-Communist turmoil in China provided an easy opportunity for Japan to further its goals in the 1930s. Japan saw Manchuria as a limitless supply of raw materials, a market for its manufactured goods (now excluded from many Western countries by Depression era tariffs), and as a protective buffer state against the Soviet Union in Siberia. Japan invaded Manchuria outright after the Mukden Incident in September 1931. After five months of fighting, the puppet state of Manchukuo was established in 1932, with the last emperor of China, Pu Yi, installed as a puppet ruler. Militarily too weak to directly challenge Japan, China appealed to the League of Nations for help. The League's investigation was published as the Lytton Report, condemning Japan for its incursion into Manchuria and causing Japan to withdraw from the League of Nations entirely. Appeasement being the predominant policy of the day, no country was willing to take action against Japan beyond tepid censure.

From this point until 1939, Japanese aggression and the West’s appeasement of Japan led to increased expansion of the Japanese empire into China proper.

The Nationalist-Communist turmoil in China provided an easy opportunity for Japan to further its goals in the 1930s. The records are primarily instructions to and despatches from diplomatic and consular officials; the despatches are often accompanied by enclosures. Also included in these records are notes between the Department of State and foreign diplomatic representatives in the United States, memorandums prepared by officials of the Department.