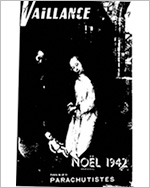 Voices From Wartime France, 1939-1945: Clandestine Resistance And Vichy Newspapers (La France Pendant La Guerre 1939-1945: Journaux De La Résistance Et De Vichy) provides perspectives from both the Vichy government and the resistance movement during World War II. This unique collection constitutes the sum of the French press that actually reached Britain during the occupation by the Germans from 1940 to 1944. It is the record of what was known by the British about the hearts and minds of the French people at the most dramatic period of their shared history. (Source library: British Library Newspaper Library, Colindale, London)

Voices From Wartime France, 1939-1945: Clandestine Resistance And Vichy Newspapers features all of the French press that actually reached Britain during the occupation by the Germans from 1940 to 1944. This unique collection offers the complete French holdings of the British Library, acquired through a variety of intelligence, clandestine and neutral sources. It provides as full a view of life during World War II as was possible at the time.