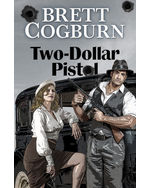 The Great Depression has brought with it hard times like nobody has ever seen. It’s the era of gangsters‚ G-Men‚ hobos‚ and soup lines. Indeed‚ the future looks as dark as an Okie dust storm‚ at least to those old enough to know better.

Two young lovers‚ Claude and Myra‚ by chance or fate‚ set out to get rich quick or die trying. Being good comes easy to some‚ but the trick to being bad is living to spend the loot. Along the back roads and byways of America‚ this star-crossed pair will become as famous as Bonnie and Clyde — if lawmen in three states and a Dallas road gang don’t get them first.

The rain stopped and the stock market crashed‚ but dreams can still come true … if you hold your gun steady enough‚ and if you don’t flinch when you look the Devil in the eye.