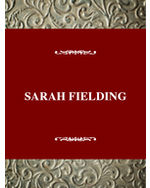 Long of interest to literary scholars as the sister of Henry Fielding and the friend of Samuel Richardson, Sarah Fielding (1710--1768) was also a popular and innovative writer in her own right. In her lifetime Fielding was seen as a leading literary figure, her experimentation with various literary forms impressing readers and influencing later writers. Her works encompass five novels, including the moral romance The Adventures Of David Simple and the philosophical fiction The Cry, as well as one of the earliest school stories for girls, a pamphlet of literary criticism, a fictionalized autobiography, and a translation of a classical Greek text. In her fiction Fielding explores the complex relationship between words and things and the moral questions confronting women and men in the middle 18th century; in her time she staked the claim of the woman writer to help shape the development of realistic and romantic fiction.