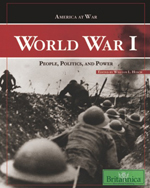 Beginning with the assassination of the Archduke Ferdinand of Austria, World War I, sometimes called the Great War, spiraled into a struggle lasting four years, leaving ten million dead, and affecting the lives of millions more. This investigation of World War I begins in the shaky political climate that helped foment a massive conflict that swept up the world, follows through battles of import and their outcomes, and includes plenty of side focuses on such concepts as trench warfare and the Schlieffen Plan.