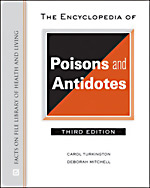 The Encyclopedia of Poisons and Antidotes, 3rd Edition

Poisons and other toxic substances have been a subject of fascination and fear throughout history. Even with all the advances in medical science today, poisons still remain a serious health risk. Every year approximately 2 million cases of poisoning are reported to poison centers across the United States, with more than half of them involving children under the age of 6. Poisoning is the fourth most common cause of death among children. Because many poisonings are accidental, simple safety measures - such as keeping harmful substances out of reach of children - can help prevent them.

The Encyclopedia of Poisons and Antidotes, Third Edition reflects the most recent developments in the world of toxicology. Nearly 600 up-to-date entries detail poisonous substances ranging from common household items to exotic plants and animals. Entries describe the nature of the toxin, the symptoms it causes, and available antidotes and treatments. Special topics covered include children and poisons, first aid for poisoning victims, food poisoning, and pets and poisons.