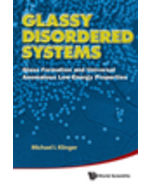 The present book describes the fundamental features of glassy disordered systems at high temperatures (close to the liquid-to-glass transition) and for the first time in a book, the universal anomalous properties of glasses at low energies (i.e. temperatures/frequencies lower than the Debye values) are depicted. Several important theoretical models for both the glass formation and the universal anomalous properties of glasses are described and analyzed. The origin and main features of soft atomic-motion modes and their excitations, as well as their role in the anomalous properties, are considered in detail. It is shown particularly that the soft-mode model gives rise to a consistent description of the anomalous properties. Additional manifestations of the soft modes in glassy phenomena are described. Other models of the anomalous glassy properties can be considered as limit cases of the soft-mode model for either very low or moderately low temperatures/frequencies